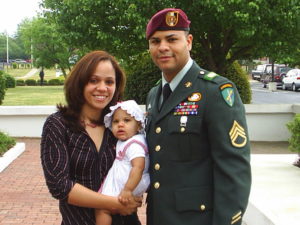 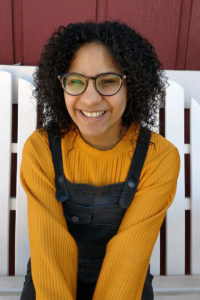 Abigail Dickinson, the daughter of Staff Sergeant Michael A. Dickinson, II and Glorygrace Dickinson, is the Corporal Christopher Kelly Willis Foundation’s 2018 Scholarship Recipient. Through the generosity of our corporate sponsors and individual sponsors, Abigail will receive a future-use college scholarship intended to cover the entire unmet need of her college tuition and expenses. Click here to read more about his daughter, Abby (pictured at right).

Michael A. Dickinson, II, served one tour in Kosovo, two tours in Afghanistan and was on his second tour of Iraq when he was killed nine days before he was to come back to the states. He died in Ar Ramadi, Iraq, when his dismounted patrol encountered enemy forces small arms fire. His daughter, Abigail, had just turned two years old.

SSG Dickinson is the son of Vicki and Michael Dickinson, of Battle Creek, Michigan, where he was raised and graduated from Harper Creek High School. Michael was a high school athlete, played in the band and is remembered as full of mischief. He knew at a young age he wanted to become a soldier, following in the footsteps of his father and two grandfathers who all served in the Army. He enlisted through the delayed entry program while he was in high school and left for basic training one week after graduating in 1998. Michael loved his country and served selflessly, with a singular determination to bring all his men home. He was known as a great leader, was highly decorated and was posthumously awarded the Bronze Star Medal, Purple Heart, Army Good Conduct Medal, Iraq Campaign Medal and the Combat Action Badge. Michael married Glorygrace in 2004, became step-dad to her four children and welcomed their daughter, Abigail, into the world on July 2, 2004. Michael called home on July 2, 2006, to wish his daughter a happy 2nd birthday only fifteen days before he was killed. Abby has grown into a remarkable, determined young woman who loves to read, listen to music and has an unusual depth of insight on life.

SSG Dickinson made the ultimate sacrifice and is a true American Hero. We are proud to honor his memory during this year’s Warrior Ride and appreciate your support in securing a collegiate future for his daughter, Abby.

Staff Sergeant Michael A. Dickinson, thank you for your service to our country!
We will never, ever forget!