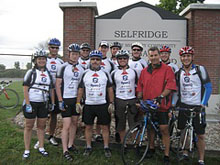 This year was the Fourth Annual Warrior Ride of the Willis Foundation.  The ride this year took place Thursday, September 24th through Sunday, September 27th.  The riders rode bicycles 247 miles from Selfridge Air National Guard Base, north of Detroit, through Ann Arbor and Albion to the Fort Custer National Cemetery in Battle Creek, Michigan, where Corporal Willis is buried.  They continued to the Battle Creek military base where a reception for the riders, families, guests, and service people from the base was held.

To raise funds, riders asked corporations, clubs, family, and friends to sponsor them by making a donation to the Willis Foundation.  The majority of funds raised this year will fund college scholarships for the benefit of Michigan children who have lost their parent (or whose parent has been permanently disabled) in combat.  During the end of ride reception, a scholarship was awarded to Amirah Goode (pictured above to the right), the daughter of Jordan and Aubrey Goode of Kalamazoo.  Jordan was a Corporal in the Army and was killed in combat in Afghanistan in 2007.