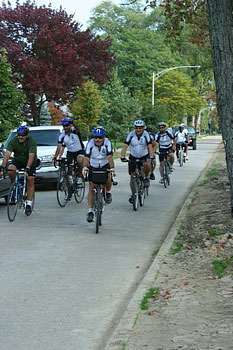 Ryan was proud to sponsor the 2008 Charity Bike Ride in conjunction with the Corporal Christopher Kelly Willis Foundation (Willis Foundation).  Ryan is the leading tax services firm in North America, with the largest transaction tax practice in the United States and Canada (website).  This year the riders journeyed by bicycle 240 miles beginning in Lapeer, Michigan on Thursday, September 25th.  They proceeded to ride around the thumb of Michigan, finishing on Sunday, September 28th.

Proceeds from this year’s charity ride benefitted the Willis Foundation, a 501(c)(3) non-profit organization based in Kalamazoo.  The foundation was formed in honor of a beloved Marine, Corporal Christopher Kelly Willis USMC, and provides Great Rewards for Great Warriors.  The mission of the Fourth Annual Charity Bike Ride was to continue to perpetuate the memory of Corporal Christopher Kelly Willis by fostering and contributing to the welfare of those things in life he loved and cared for the most, the world's children and the United States Marines.

The majority of the funds raised through the 2008 charity bike ride was used to create a trust fund in honor of those soldiers who gave the ultimate sacrifice in defense of our great nation.   Specifically, the Willis Foundation is establishing scholarships for the benefit of children who have lost their parent (or whose parent has been permanently disabled) in combat.  These children have also given the ultimate sacrifice.