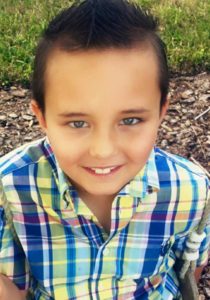 Adler Smith is the son of Staff Sergeant Christopher Smith (from Holland, Michigan) and Bobbi Jo Smith. Adler was selected as the 2015 Willis Foundation Scholarship Recipient. Adler will receive a future-use scholarship for his college tuition and expenses.

Adler was only 15 months old when his father passed away on Christmas Eve in 2008. Alder is living in Florida with his mom, Bobbi Jo, who is a school teacher.

Adler has taken after his dad in regards to his size. According to Adler's Grandma Donna, he is a big boy (already 5' tall in the 3rd grad with a size 8 shoe!) and as a result many expect him to be more mature due to his size, but he still has a child's heart.

Adler's family shares many stories and photos of his dad with him, but they do not have anything with his dad's voice or laugh. Adler expressed that he was having a hard time and missing his dad, wishing he had more memories of him. His family is hoping to find someone who has a recording of Chris' voice, as recordings were not popular when Chris was young. Adler's family continues to work with him to help with his loss.

Adler was given his first dog for Christmas 2015. He named his dog Harley. He is a great buddy for Adler, as well as his future family. Adler's mom is engaged to a gentleman who has two boys himself.

Adler, the Willis Foundation wants you to know that your father is an American Hero!