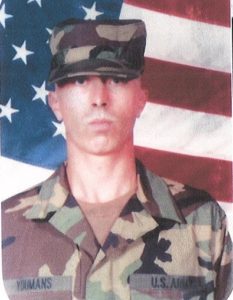 KIA: Passed away on March 1, 2006 from injuries sustained from a remote-detonated improvised explosive device on November 21, 2005.

The Corporal Christopher Kelly Willis Foundation’s 2019 Scholarship Recipient is MacKenzie Youmans (“Kenzie”).  Kenzie is the daughter of hero, Sergeant Joshua V. Youmans, and Katie Youmans.  Through the generosity of our corporate sponsors and individual sponsors, Kenzie will receive a future-use college scholarship intended to cover the entire unmet need of her college tuition and expenses.

Josh and Katie Youmans, of Flushing, Michigan, were married on September 16, 2000.  In 2003, Josh joined the Michigan Army National Guard, graduating from Basic Training at Fort Benning, Georgia.  Josh was then assigned to Company B, 1st Battalion, 125th Infantry Regiment located in Saginaw, Michigan.  Josh was proud to be an American soldier and was known by others to be “all infantry”. 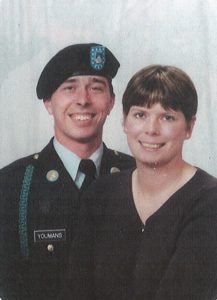 On February 2, 2005 (his 25th birthday), Josh learned that Katie was pregnant.  On February 8, 2005, only six days after finding out he would soon be a father, Josh deployed to Iraq in support of Operation Iraqi Freedom.  Josh and Katie welcomed their daughter, Kenzie, into the world on October 6, 2005 (Josh being present for the birth through a phone call from Iraq).  On November 21, 2005, just seven weeks after the birth of his daughter, Josh was injured while conducting combat operations near Camp Habbaniyah, Iraq, when his Humvee was hit by a remote-detonated improvised explosive device.  On November 24, 2005, Josh was flown to Brooke Army Medical Center at Fort Sam Houston in Texas.  Katie flew to Texas with their infant, Kenzie, where she remained by his side for three months while he received numerous surgeries and treatments for his insurmountable injuries.  Sergeant Youmans passed away, with his family by his side, on March 1, 2006.

Sergeant Youmans made the ultimate sacrifice and is a true American Hero.  We are proud to honor his memory during this year’s Warrior Ride and appreciate your support in securing a collegiate future for his daughter, Kenzie, who we believe has also given the ultimate sacrifice.  Kenzie is now a delightful 13-year-old young lady who loves to sing, dance, and play the flute.  Kenzie hopes to be a teacher or a professional singer when she grows up and honors her “Papa” by doing her very best.

Staff Sergeant Michael A. Dickinson, thank you for your service to our country!
We will never, ever forget!