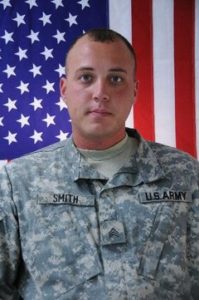 Circumstances: Killed in a combat zone as a result of an accident after setting out on combat patrol to recon observer locations for a future mission at locations south of Baghdad, Iraq. Upon reaching a canal road, the road collapsed under the vehicle causing it to completely roll over into the canal. Chris and two of his comrades lost their lives in the accident. 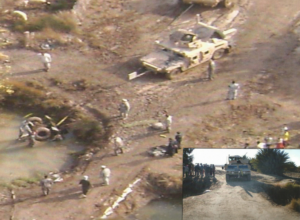 Staff Sergeant Christopher Smith, originally from Holland, Michigan, served two tours in the United States Army from 2001 - 2004. He was only 28 years old at the time of his passing, on Christmas Eve in 2008. Chris left behind his wife, Bobbi Jo, and son, Adler who was only 15 months old.

Chris had a very loud, booming laugh which made everyone else around him laugh whenever they heard it. Chris' mom's prayer is that someone out there has a recording of Chris' laugh. Chris was 6'4" and wore a size 14 boot. According to his mom, Donna, he was always a big boy growing up with many who expected Chris to be more mature because of his size.

Chris' baby brother, Phil, was a medic in the Army in Washington at the time of Chris' passing.  Due to the "Saving Private Ryan" law, Phil was discharged 10 months and 10 days after the loss of Chris, as he was now an only child.

Donna now does speaking engagements where she shares about choosing to have hope and moving on after a loss, regardless of what type it is.

After the loss of his son, Glenn Smith wrote a book about their loss and the way they handled it with the help of the Lord and their military family. The book is called "Silent Nights, Finding Hope in the Darkness."

Following is an excerpt from Glenn's book: 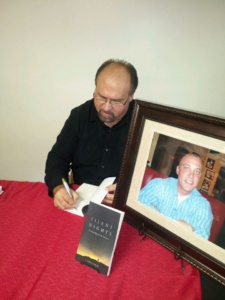 Slowly, I opened the door all the while standing my ground just daring him to speak. But speak he did!

I answered him, 'Is this about Christopher?'

'Mr. Smith,' he continued, 'my name is First Sergeant Allen. Mr. Smith, I'm sorry, but I've been sent here tonight by the United States Army. Mr. Smith, I'm sorry to have to inform you that on 24 December 2008, your son, Staff Sergeant Christopher G. Smith, was killed south of Bagdad in the Babel province of Iraq while on a patrol mission. May we please come in?'

In life, we are all subject to what Pastor Glenn Smith calls silent nights, the dark times when all hope and joy seem to disappear. Pastor Smith's silent night occurred when his son, Chris, died in service to his country in Iraq on Christmas Eve. As a parent, he was devastated, but as a pastor, he was at a loss on how to cope with his grief.

How can I cope? Does God abandon us during our silent nights? What can I do? Pastor Smith had to work through such difficult questions, and the answers he found gave him a renewed hope and stronger relationship with God. Using a mix of what he learned from his tragic loss and his years of experience counseling others, Pastor Smith can show you how to find your way through your own silent nights.

Find comfort and peace in Silent Nights: Finding Hope in the Darkness.

Staff Sergeant Christopher Smith, thank you for your service to our country!
We will never, ever forget!