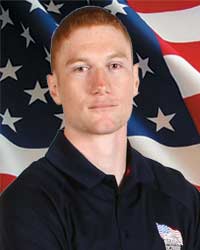 Circumstances: While on foot patrol in Helmand Province, Afghanistan, Cpl. Thrailkill was doing a sweep of a building when he noticed a small disturbed patch of dirt. After determining it was an IED, he stood up and turned to his left to get help and the IED was triggered. Cpl. Thrailkill reported that everything went black and there was a loud ringing in his ears as he was thrown into the air, landing on his back, and unable to move his legs. Once he realized the severity of what was going on, he realized both of his legs were missing. He was then airlifted to a local hospital and stabilized. As a result of the blast, Cpl. Thrailkill sustained traumatic amputations of both legs above the knee and extensive damage to his right hand.

Bobby grew up in Pentwater, Michigan. At the time of Bobby's accident, he was only 19 years old. Bobby completed his rehabilitation at Walter Reed Medical Center in Washington, DC at the same time as SSgt. Travis Mills.

Bobby played on the U.S. National Development Sled Hockey team in 2015, which grooms players for the U.S. Paralympic Team. Bobby is an MSU fan and enjoys going to the movies, learning new things, and spending as much time possible with his son, Zekiah.

Through Homes for our Troops, Bobby was a Veteran home recipient on June 6, 2015.

corporal robert "bobby" lee thrailkill, Jr., thank you for your service to our country!
We will never, ever forget!